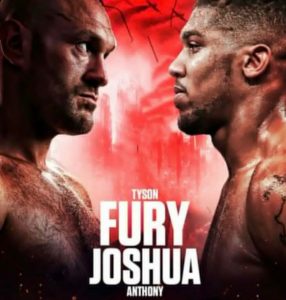 Tyson Fury calls Joshua for a Match after Usyk confirmed he can’t fight again until 2023. Most anticipated ” Battle of the Britannia” who will rule the Empire

The 34-year-old has not fought since claiming a stunning stoppage win over Dillian Whyte in April, since coming in and out retirement on numerous occasions.

Fury is now determined to get another fight in this year, though, pushing for a bout against Joshua before pursuing any alternate option. ‘I think you’ve all heard that I’m going to be fighting soon, within the next few months,’ Fury said in a video posted across his social media channels. ‘I think that before I announce an opponent that I need to do this, just in case. ‘Anthony Joshua, I know you’ve just lost a fight to Usyk; you’re beltless at the moment. I’d like to give you an opportunity to fight me for the WBC heavyweight championship of the world, and the lineal championship, in the next few months. ‘You’re coming off a 12-round fight so you’re match fit, you’re ready. I’m giving you a few months’ notice. If you’re interested, I’ll send you the date over, and we can rumble. A battle of Britain for the heavyweight championship of the world.

‘Let me know if you’re interested. If not, I will select another opponent.’ Usyk retained his WBO, WBA and IBF belts with a split-decision victory over Joshua in August

The Ukrainian mastermind has confirmed he has no plans to fight Fury until 2023, however Matchroom promoter Eddie Hearn has confirmed Joshua will be back in action later this year

Fury’s call-out comes after the Gypsy King confirmed he will be fighting ‘very soon’ following his appearance at WWE’s Clash at the Castle event at the Principality Stadium in Cardiff.

Both Fury and Usyk have insisted a battle to become the first undisputed heavyweight champion since Lennox Lewis is the priority.

However, Usyk last week revealed he won’t be fighting this year due to injuries sustained against Joshua, and to spend time with his family having enlisted with the Kyiv Territorial Defence earlier this year following the Russian invasion of Ukraine.

The Gypsy King is now looking for a new opponent, which he insists will be announced shortly.

‘I will be fighting very soon,’ he said. ‘I don’t know who against, we are still looking for an opponent.

‘I will fight in the next few months here in the UK. Usyk will not be ready, he does not want to fight. I will fight whoever is available.

‘Whoever Frank Warren gets for me, that is who I will be defending my WBC belt against.’

Meanwhile, promoter Eddie Hearn last week confirmed that Joshua will be out in December against a top 15 opponent, with a stadium fight against Whyte planned for next year. ‘We’re all gunning for a December return,’ Hearn said. ‘It’s not confirmed, but that’s where everyone’s minds are at. ‘We’re not booking a venue, but the conversations – as recently as yesterday – were December for his return.