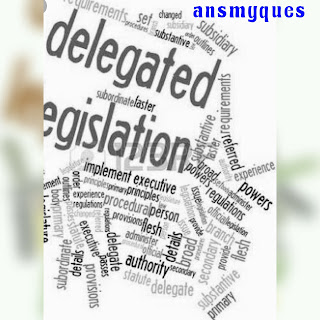 DELEGATED LEGISLATION
Delegated legislation can be define as the act or an idea whereby power is being given to a subordinate body who might know more about legislating on that particular issue order than legislature itself.

Splinting it into two part, we can see that delegated legislation is brought out from the word “delegated” which means to give power to, and “legislation” which means to debate on the best legal proceeding or favorable rule which might suit a purpose which most time might be administrative work of the country.
Law that are made by this bodies are always referred to as “bye-laws”. The legislatures finds it more comfortable to start the major principles of the general law, after then hand over the main administration of that law to the hand of this bodies.
Delegated legislation is one of the leading characteristics of the modern government i.e it is essential for accountability and efficient purpose, it helps the legislatures in many area e.g to see to more laws that will help the state and not just only seeing through the administrative process of one law only also it gives the legislature rest of mind as far as the administrative of that legislation is in the hand of a reliable body.
TYPES OF DELEGATED LEGISLATION
Ø BYE-LAWS: bye laws are laws that are made by some institutions like local government, ministries, corporations e.g water corporation and so on. These power is particularly given to them through an act of parliament.
Ø ORDER IN COUNCIL: this type of order might be exclusively or the king or queen as it can be see in Britain, the king or queen might give order that has the backing up of the law. As for Britain this order are ratified by privy council i.e the highest court of appeal in united kingdom which also serve as the body that advice the crown on both political issue and governmental  affairs of the state.
Ø SPECIAL PROCEDURE ORDER:this is meant for a minister, he make this kind of order based on is ministry { minister is the political head of  ministry } and present or tender it to the legislature/parliament [ great Britain call it parliament,united state of america call it congress and other country call it legislature]. The order is then passed into force after a maximum of 14 days except there is a case of general objection by the legislature.
Ø STATUTORY INSTRUMENT : this is mainly done by the ministry concern, and this laws might comes from any ministry of a country for instance the ministry of education might give law that no smoking in schools, this are statutory instrument that are exercise by ministry.
Ø WARRANTS : its another form of delegated legislation or to be clear, it is see as a document sign by a judge given to a police authority to do something. You have always hear about warrant search? Don’t you
IMPORTANCE OF DELEGATED LEGISLATION
Ø REDUCTION OF WORKLOAD: the workload on the parliament is lifted to at least a degree through the advent of delegated legislation.
Ø IT SAVES TIME: it can easily save the time for legislature to be debating on one law again and again which might even lead to the unfinished debate on that bill, but with this bodies  time is now on our side.
Ø TECHNICAL LANGUAGE: you cant tell me electrical engineers language is the same as what they will use in the debate if it were to be the legislature that will debate on it.
Ø EFFICIENCY AND ACCOUNTABILITY: the work done by this body must be smooth for they will no in any way want to cause their reputation to filthy, so if any maladministration is done, they will be responsible for it.
Ø EXPERIMENT : it is useful when experiment is needed. Most local government have achieved cogent things through the routine of research.
See also  What is Computer language programming (first generation to last)