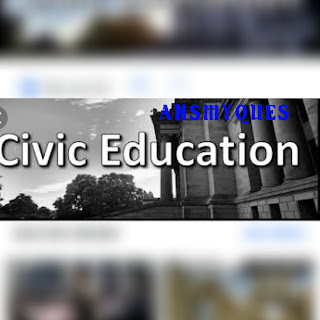 1………….is the set of rules and regulations through which a society is governed (a) book (b) document (c) law (d) theory

Ans : law, it is what defines the do and does of a society

Ans : AV DICEY, he propounded rule of law and also gives its principles e.g supremacy of the law over all citizens

3. The rules of law implies………..of the law over every citizens (a) Supremacy (b) adjustment (c) review (d) exposure

Ans : supremacy, I.e even the power of the so call arms of government must be limited

Ans : principle of immunity, not there

6. One of the following is not the benefits of features in rules of law (a) it protects citizens rights against arbitrary (b) guarantee fundamental human rights (c) allowed for equality (d) ensure press freedom

Ans : in this case the odd one is ensure press freedom, for all is in the game

7. Keeping the society is the responsibility of………….(a)government (b) executive (c) everyone (d) army

Ans : C, everyone, it is stated in the constitution that before the arrival of govt officials like police, people should at least protect their immediate environment.

8. The law making body in Nigeria is togetherly called (a) house of rep (b) national assembly (c) parliament (d) house of senate

Ans : National assembly, at the federal level Nigeria legislature is bicameral in nature

Ans : universal declaration of human right, it was created in 1948

12. The……..serve as the only body that can declare one guilty of a crime (a) executive (b) legislature (c) the courts (d) anybody

Ans : The court is the legal institution to declare one guilty of a crime

13. Limitation of human rights include one of the following (a) defamation of characters (b) freedom of expression (c) freedom of human beings (d) legal use of authority

14. Anyone arrested should be given………..on an offense through normal legal process in the court (a) punishment (b) fair hearing (c) phone (d) recall

Ans : Fair hearing : I.e anyone who is taken to court should be given the right to talk out is own part of the event.

15. Some advantages that are fundamental which a individual can lay just a claim on if denied or derived is………….(a)fundamental human rights (b) constitution (c) rules of law (d) singing prayer

Ans : Fundamental human right, it is the inelianable right enjoy by citizen of a country

See also  Punctuation mark, types of punctuation and tips to use them (2)

16. Provisions of enlightment programme is the function or one of the ways to protect……… (a) money in the bank (b) abuse of human rights (c) people from going out (d) the constitution

17. Educating teachers, students and populace is another means of preventing abuse of human rights (a) true (b) false (c) I don’t know (d) none of the above

Ans : true, for some people did not no the tenet of the constitution

Ans : medical, this is the only odd thing for the rest are election techniques

19. Children should be treated has human beings and not…………. (a) animal (b) alien (c) unrighteousness (d) baby

Ans : Animal, animal is what offends you and you plan to kill it or murder it.

20. The rights of every citizen to vote and be voted for in an election is called………… (a) franchise (b) voting (c) human rights (d) choosing

Ans : REPRESENTATIVE, just as it is in democracy

Ans : state, it happens in a federal system

Ans : the citizen of a country has full right defined by the constitution

30……….define democracy as the government of the people by the people and for the people (a) ibkemmanuel (b) Mohammed buhari (c) Abraham Lincoln (d) Shaheed balogun