Skip to content
Home
EDUCATION
THE ANVIL AND THE HAMMER FULL CONTEXT, SUMMARY AND FULL ANALYSIS
Spread the love 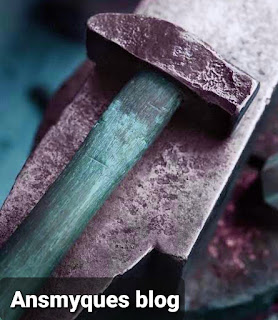 Caught between the anvil and the hammer

5 The trapping of the past, tender and tenuous
Woven with fibre of sisal and
Washed in the blood of the goat in the fetish
hut
Are laced with the flimsy glories of paved streets
The jargon of a new dialectic comes with the

10 Charisma of the perpetual search on the outlaw’s hill.
Sew the old days for us, our fathers,
That we can wear them under our new garment,
After we have washed ourselves in
The whirlpool of the many rivers’ estuary

The anvil and the hammer is an African poem which mainly stress in the clash between cultures I.e the white man culture (hammer) and the traditional culture (anvil), it was as the conflict of dealing with two cultures that make the poet here wrote the evil of it, the poet lives with a clash of emotions arising from this contact.

The anvil and the hammer stress more on the issue of one of the culture being pretty attractive and that is the European while one is repellent but natural, it was during the colonia time the poem was set, the traditional culture had been displaced by the foreign culture, African in this situation faces a lot of tribulations in the hands of colonial masters, so this make many people sway away from it and those who could live with it or withstand it do so with emotion of humiliation.

The two cultures, both the new and the old subsist in Africa, African culture is marked  marked by “the trapping of the past” while the new age is the “flimsy glory of a paved street”. The poet further move on to say that he found himself in “the jagon of a new dialect” relating to the language one doesn’t understand before, having exposed himself (poet speaker) to “many river estuary “. He further move on to say that the only way out we have is to “use snatches from there tune” I.e imbibe there idea in order to “make ourself new flag and anthems”.

The transformation was likened to the new birth goes with the “pangs” that deliver me I.e the poet speaker here talks about the pangs that he was born and breed in, the traditional culture was where he has got all his joy all along since birth, in the successive lines the new birth call for “the joy of new song” which is the coming in of the colonialism into their society, however this expectation is unfounded as the “trapping of the past” for outweigh “the glories of paved street”. ”

The outlaw hills which he described as the abode and basement of colonialism not only that but include every formal concepts brought by the colonialist e.g schools, churches, and all other learning arena and all, despite all this the poet speaker prefers the traditional system of living, so he said “sew the days for us, our father that we can wear them under our new garment“, the poet speaker here pray and plead their ancestors to please not to let the culture totally die in their Era and the so call foreign culture should not dominate “the days” which is about to go on extinction by the “new gament”. The new garment here symbolizes nothing but the foreign culture.

Now the new garment is dominating and we have no other option than to “snatches from their tune”, this means nothing but one left with no other choice than just to comply with the colonialist idea, now as we “snatches from their tune”  just to ourselves “new flags and anthems”. As noted earlier, this process of nation building goes on in “splash and moan of the sea.”

The noise in the sea here symbolizes nothing but activities of importation and exportation which is ushered in industrialization brought by the colonialist, or some engines that makes a lot of noise during factory goods-production.