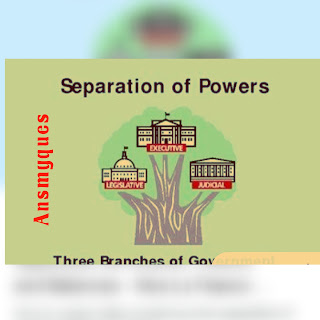 Separation of powers can be defined as the division of political powers and functions among the three arms of government e.g the executive,legislature and judiciary. These bodies should be organized and be involved only in the administration of that particular department. For example the executive should always get involved in policy making and implementation. Some liberal writers believe that power is dangerous and they argue that it is normally bad for men to enjoy an excessive amount of it. It is said in the LORD action that ‘power corrupts, but absolute power corrupts absolutely’.
Montesquieu, as in his book, the spirit of laws, argued that if the legislature and executive power are single(unity), there can be no freedom for the citizens of a country. He maintained further and gradually that if the same person maintained the rule of tyrannical laws, such laws will also be executed in a tyrannical manner.
Merits of separation of powers
1)    Freedom and liberty:The freedom and liberty of individual are protected by the hands of the government, since the constitution has these rights are independence to protect them.
2)    Excesses of performance:This is cancelled on the part of the groups exercising the functions.
3)  Efficiency in administration: separation of powers provide efficiency in the administration of the country
4)   Checks and balances :  separation of power works well when there is the principle of checks and balances, this help to check on the short comings of any of the arms of government, the executive through this technique can check the judiciary and the two in turn could check the legislature and so on.
5.) Stable political system : when there is separation of power in a country, the country tends to live a stable political system when there is the use of separation of power, when power is not concentrated in the hand of only one person I.e the principle of separation is incurred then there is no way through which instability would intervene because the exercise of power is being shared for precision.
DEMERITS OF SEPARATION OF POWER
Thanks for stopping by to get this information from us, we hope you enjoy your stay.. Bye for now
See also  Public Relations as a Management Function