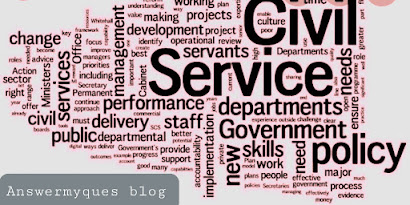 In line with our former post on the meaning of Civil Service and its functions we decided to come up with new post, today you are going to learn how the structure of the civil service works and what are their characteristics which also is regarded as features.

A quick reminder is that the civil service is a segment in government that assist the executive in implementing governmental policy and do have it in mind that there is no country on earth without civil servants,  just put it in a simplest term as government workers and the ministry they worked in of which is going to be headed by a Minister at the federal level and Commissioner at the state level. So let get into it, don’t forget to subscribe to our blog for fresh post like this one.
CHARACTERISTICS OF CIVIL SERVICE
1. IMPARTIALITY : the civil service believe to be fair and purely just to any government in power, this is that despite government (varies by tenure) is a short time thing, the civil service need go abide by the policy of such government and never let the administration down because the betterment of an administration in one way or the other can still be linked back to Civil service. Impartiality of the civil service will help a country move it image in both internal and external, so, as a feature, Civil service should not let down a particular government administration.
2. PERMERNANCE : just as we said in the preceding point, the permanence of Civil service means its continuity I.e despite a government regime could change anytime, the civil service enjoys independence in form of permanence and never fold up in anyway because it is a life time thing, more like one serving his/her country.
3. ANONYMITY : This is that any of the civil service member is not authorized to speak to the press on any issue affecting or making it thrive except being given go ahead by the Minister or Director General. You would ask why this is meant to be this way? Alright, the credit or failure of government on any issue is not blamed on the Civil servants but the Minister (the head of a ministry at federal level) or the commissioner (the head of the ministry at state level).
4. NEUTRALITY : Workers in the service are not expected to engage in any form of partisan politics, what do we mean by partisan politics, this is that a civil servant must not adhere to a political agreement or faction with it because this in one way could hinder the smooth running of such ministry.
5.  EXPERTISE : Civil service brings about having experts in different fields, the continuity in the years of working as a civil servant is the brain behind this. This is that, people become so use to what they do everyday and they could explain every pros and cons of it, they could foresee possible problem,  proffer solution to imminent ones and make for the smooth running of the administration.
6. MERIT : Employing civil servant most of the time is always based on merit and this is one mechanism that enhance effectiveness and efficiency in their areas of performance.
THE STRUCTURE OF CIVIL SERVICE
1. ADMINISTRATIVE CLASS : This is the highest structure in civil service and most people here are graduate in University or Colledge, they are expert and must have vast knowledge in alot of things, the people who merits this class are mostly senior men with reasonable experience in the field. People in this class also advise the minister or commissioner on decision not take on a particular issue which might be affecting the government ministry, also they make policies in some areas needed in the ministry. They are mostly graduate, Director generals, Deputy Director General, Principal official etc.
2. THE PROFESSIONAL CLASS : This people are mainly recruited mostly for professional purposes. They are the class in civil service that carries out professional I.e see to issue in a particular field e.g state prosecutor who make sure the right of the accused person is not violated until declare guilty by the court of laws, so as doctor also, a Gynecologists who see to child birth in government hospital so as engineers and so on.
3. THE EXECUTIVE CLASS : The executive class as the name depict means the class that sees to the implementation or formulation of the ministry policies and programs,  they mostly Coledge degree holder, BSC or HND and so on, they see to the smooth running of government ministry administration.
4. THE CLERICAL CLASS : This class are mostly responsible for clerical works and they are mostly high school certificate holder only, the work of people in the clerical class include clerical officers, clerical assistants, typist, etc. They also involve in many routine works such as moving file from one boss desk to another, they to one degree look official in offices also but not up to total standard.
5. MESSENGERIAL CLASS : This is the least class in Civil Service, as the name depict, they are messengers with no promotion means except they probably have something to showcase like a certificate, they run errands for top officials in executive, Ptoffesional and Admin class. They comprise of Cleaners, Messenger, Drivers etc. They are either to tidy up the office, run errand delivering official messages or doing other menial jobs which include driving official vehicle.
So, thanks for stopping by to get this lovely post from us, you can subscribe to this blog go get new update. May the lord bless you.
Do visit next time…HASTA LUEGO
See also  One of the majorly influence the success of Sokoto jihad