Skip to content
Home
EDUCATION
Punctuation mark, types of punctuation and tips to use them (2)
Spread the love 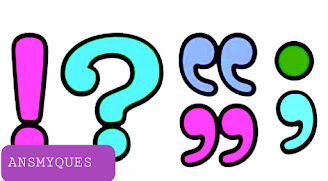 Today will be starting somewhere interesting and don’t forget that punctuation marks is a sign added to a text to show the division and different part of it.

Examples of word that uses question mark.
Note and belief : that you don’t have to use question mark at tthefront of an indirect word. What are indirect speech, it is the speech said by someone and re-quote by another. E.g
2. The Colon: this sign is often use in many case to show the introduction of listed items, a colon is indicated by the sign (:).
Sometimes a colon might be used in place of comma, it is the sign used in writing especially to introduce a list of things or a sentence or phrase taken from somewhere else.
Tips on how to use a colon
3.  The semi colon: it is used to join clauses which are separated but related in thought. It is stringer than a comma but not so wrong as a full-stop and is often used in place of a conjunction or other sentence link. It is indicated by the sign (;)
Try to get this point, semi colon to divide series of item when some of the items has comma I.e there are some words that as an inbuilt comma already e.g Aburi-abuja, Nigeria;… You can see that there was a comma in the front of aburi abuja and that is what ushers in the semi colon use in front of Nigeria.
See also  One of the following is not a gearing factor towards the great trek.
4.  The Ellipsis: it is indicated by the use of (……..). This is used to show an omission from a sentence e.g “life is a walking shadow, a west sorrow……..age is number, maturity and age are not synonymous….
In here we ensure that the reader has to finish the entire sentences.
5.  The Hyphen: the hyphen is indicated with the (-) sign, it is very shorter than a dash, and it is a sign that indicates a word has been divided, the divides into two part which is usually at the end of the line and the beginning of the next . hyphen is also used in formation of compound words. Like Father-in-law, anti-apatheid.
Hyphen + some important words will form sense like:
6. The dash: it is a line mostly ommitted in either beginning, middle or ending of a word just for the person directed it to, to fix the appropriate answer in the blank line, it is indicated by (————–), it is short horizontal line used to separate parts of sentences. it is a longer type of hyphen, it is used to show any intentional omission of a name or a word.
Example of appropriate use of dash:
7.  Bracket or parentheses: it is indicated by the [ () } sign, a bracket is either a two symbols put around a word, phase, sentence in a pieces of writing to show that what is between them should be considered as separate from the main part. The chief use of bracket is to enclose a parenthesis. (A parenthesis is added to a word or sentence to give either the real meaning or another meaning of it in a new dimension) . parenthesis is an additional information which is separated from the main part of the sentence.
Examples are:
Thanks for stopping by to get this lovely post from us… we hope you come around soon
See also  The difference between Federal University and State University