Skip to content
Home
EDUCATION
THE DINNING TABLE BY GBANABAM HALLOWELL : ANALYSIS/SUMMARY, THEMES AND FIGURES OF SPEECH
Spread the love 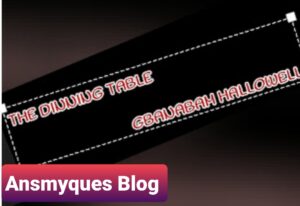 The poem is traceable to the 11 year Civil War Sierra Leone experience to be precise, the dinning table itself is just a mere head title for this poem but it carries a very deep and indept meaning, dinning table in the
literal sense should be a place where night food and merriment of the night is done but another is the semantics tagged with this, the dinning table that should be a family eating space in the night is now metaphorically happens to be where brothers eat each other’s flesh in the night.

The dinning table itself means nothing but a war ground/battle field where pain and agony continue to be the order of the day between the people of the same land, this was the case that even call for “children from alphabeta”, which means children that are even suppose to be in school get involved  in the war “with empty palm” due to the death of their father, mother and their love ones, they are being personally forceful to involve in the brotherly war which they goes into with “switch blade in their eyes, and silent in their voice”, this depict anger. This war tends to have damage a lot of things in their city then and a lot of life lost, and from here we get to know “when the time for them to drink from the cup of life ticks, cholera breaks its spell on crack lips” . To compress more on this same point, war has made the land a deserted one in which” the playground ” is said to be” empty of childrens toy” themalso as said earlier the available water get polluted by disease.

The scene in line 16-18 had described by the poet is that of blood, disease, sterile pain, anguish and death the father of all, the dryness steers the necessity for the throat to be assuage of its thirst. But what is the result of what to drink, let take it this way, the “gun wound ” and ‘vegetable blood” talk about has cause the people of the land to get effected by the water causing another form of death apart from the war, war has no good thing to offer a nation, but only to cause death and another means to die.

The split milk of the moon in other successive lines of the poem is likened to other people’s blood, the poet here have tasted split milk of the moon which is another brother blood, for this he promises “to be a revolutionary “, a person who will call for a total change which will make things different and upright and bring new dawn to the society through positive change.

The poet speaker who love to be a revolutionary to the war on ground is now left with indecision and laziness in the name of him also has got a lot of wound, this was reveal to us when he said “my Nile, even without tributaries comes lazy/upon its own nile”.

The last stanza his where the poet speaker now describes dinning table as one of “lovers of fire” and the poet speaker In one way or the other has got a gun wound, the blood on his body and probably some stock of shape object that have been use to pierce him has make him feel reluctant and his boot can’t walk him I.e he can’t even walk to comport himself to be the revolutionary he wants to be.