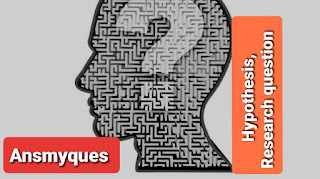 A Reaserch question is stated as a question that has relationship between two or more variables/concept- a research question as RQ.

Research question have the wildest application and can be employed in with problems of a non-experimental nature when research question are posed, the intent is merely to gather preliminary data from which testable hypothesis are often developed

After research topic has been thoroughly researched, you should have some prediction about what you think will happen in your study. This is educated guess concerning the outcome of research is called hypothesis. An hypothesis, therefore, can be defined as a set of assumption, a speculation, which is tentatively accepted as the basics for an investigation. The hypothesis is worded so thatit can be tested in your research work.that is why it has been stated what hypotheses are measurable, testable statements about the relationship between variables. Put another way, a hypothesis state a predicted relationship between two or more variables or concept. Researchers abbreviate hypothesis as H.
Different between research question and hypothesis

To explain the different between research question and hypothesis, wimmer and Dominick refer to a study done singer in 1981. In that study, the researcher sought to answer three basic research question which are follows:

1. Does television content enriched a child imaginative capacities by offering materials and ideas for make-belief play?

2. Does television lead to distortions of reality for children ?
can intervention and mediation on the part of an adult  while a child views a programme immediately, afterward, evoke changes in make-belief play, or stimulate make-belief play?
Winner and Dominick (1987:29-30) then explain that the information collected from study could provide data to create testable hypothesis suggested below:

See also  The South-Eastern part of Nigeria was _________ in its political system before the advent of colonialism.

A usefull hypothesis should possess four characteristics. These are:

1. Compatible with current knowledge in the area
2. Should fellow logical consistency
3. Should be in parsimonious
4. Should be testable

The Hypothesis be compatible with current knowledge means that if available literature strongly suggested one point of view, researchers who develop hypotheses that oppose this knowledge must provide basis, else, he/she alpws down development of that area.