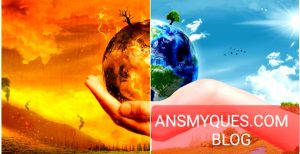 Our planet is at breaking point. But it is not too late to save it. The undeniable truth is that we continue to do much great damage to our planet and little solution has been made. Climate change effect spreading its fluttering wing as we humans keep exacerbating the process meanwhile the battle for climate change is the need for survival. Then one stops at understanding what climate change is? According to the United Nations, Climate Change refers to long term shifts in temperatures and whether patterns. These shifts may be natural, but since 1800s, human activities have been the main driver of climate change, primarily due to burning of fossil fuel like coal, natural gas or petroleum which is formed from the remains of ancient marine organisms, such as plants, algae and bacteria.

The result of the above serve as harbinger and the production of Greenhouse Gases (GHG) which according to Natural Resources Defense council (NRDC) suppose can occur naturally or fluorinated. Fluorinated gases are man-made gases that can stay in the atmosphere for centuries and contribute to a global greenhouse effect. As it is meant to be that law regulates conducts in the society, so as it has come to play on scene of climate change in Nigeria, which in 2017 was listed as one of the top ten vulnerable countries of the world by climate change vulnerability index. The need for resilience and mitigative plan as to climate change in Nigeria can never be more imperative. Although the level of illiteracy among Nigerians might to some extent hinders the process but with strong enlightment, there should be a light just at the end of the tunnel.

Currently, the Nigeria climate change bill has been enacted into law on November 18, 2021, following the UN conference (COP26) held in Glasgow on October 13. The act set a long term emission goal and requires the identification of interim targets. There are expressed in 5 years carbon budget which will be ratified by the Federal Executive Council, the five years budget is basically for the achievement and to ensure a net zero greenhouse gas (GHG) of which will be between National Planning, Women Affair, Agriculture. The Federal Executive Council in this stance is seen to be the main body in executing the 2050-2070. All these is the need for survival, for the injurious effect of these unusual change in climate is endless, ranging from hotter temperature, more severe storms, increased drought, loss of species to mention few.

The climate change bill (now enacted into law) has eight divisions, and each sections majors on key aspect of the act. The act provide for 9 different objectives (A-I) which practically is all about low greenhouse gas emission and mainstreaming climate change action in line with national development priorities. And if the objective set out by the bill is to be easy-achievable, vice president Yemi Osibanjo suppose Nigeria must first end energy poverty by 2030, and that global energy transition must be inclusive, equitable and just, if Nigeria is to reach the net zero emissions by 2050.

The act is to apply to Ministries, Departments and Agencies (MDA) and private entities. Subsequent segment of the act also made provision for an administrative arm of the council which in part 3, grants power to the secretariats as to monitoring, verification and reporting on the extent to which the National emission profile is consistent with the budget.
The achievement of net-zero and low carbon emission is explicitly provided in the instrument referred to as “action plan”. The action plan posit mainstream adaptation and sustainable development initiative that can help drive economic growth, reduce poverty and improve human wellbeing in a changing climate. Such action will include, reduction in deforestation, planting of tall trees, collection of taxes from big companies involve in gas energy or petroleum to mention few.

See also  How to Write Abstract for Project (with example)

The passing of the climate change bill calls for celebration, however, it does not come without sacrifice as taking note of the influence and effect of its implementation in the country can never be more imperative. Obviously, the enactment of the bill will have both positive and negative effect as related to Sam Onuigbo, coordinator of technical that revised the bill supposes, about how big deal such enactment will be for an oil dependent nation enacting a law that support zero net target.

Although, the obvious effect of the implementation is the achievement of global target of net zero carbon emission by 2060 and this would help mankind survive a supposed extinction. The implementation of the bill will help increase awareness among Nigerians who by nature are ignorance of injurious effect of climate change. By way of this (Awareness) private persons can fight along with government to achieve the greater goal of net zero target. Also, the implementation would show Nigeria seriousness and how frank Nigeria government is to the commitment and support towards important reduction of GHG or carbon emission and the priority of saving our planet. As much as there are positive effect, the negative can never be found wanted in the country. This would range from the issue of mismanagement of fund in the name of net-zero target, corruption on the part of office holders, little commitment as to the aim for some government agencies will not see themselves benefitting from it, the issue of ignorance and oblivion act on the citizen part might exacerbate the process which are all still negative effect of the bill.

In conclusion, it would not be easy achieving the greater goal if sacrifices are not made, be it a positive or negative effect, the need for survival cannot be overemphasize, and as to that, great measure through implementation of the bill should be made to achieve the desired GHG reduction goal by supposed 2060