Skip to content
Home
EDUCATION
What is Social Change? Socialization and Major Aims of Socialization
Spread the love 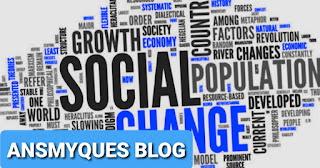 Social change is thus a product of the interplay of numerous social forces. The process of social change could happen sudden in the sense that a society could rebel to it’s government on a particular stance the country holds before and the government won’t see such an action coming,  more of like revolution without evolution. Again, the process of social could be gradual in that, it may develop probably not evenly in a country or state of a country, take for instance  the people of Newcastle in UK might feel their demand or move towards change can directly affect many other regions like London, Manchester, Birmingham and so on, such social change one can deduce it to be gradual. Social change also may be partial in that it does not displace what has been in existence before the change take place. Social change may however replace and upset something already in existence before such change takes place.

The term Cultural Contact which means contact between different culture which usually lend to social change in both system is an important source of cultural change and from gathered knowledge however, of the outcome in our society is that change is not synonymous with progress or development or retardation. The effect of Cultural contact are generally characterized under rubric of acculturation, this, which comprise of the change in artefact, custom and beliefs that is the consequence of cross-cultural interaction.

There is, however, a strong tendency or motive that some of those who witness the process of change and who maybe belongs to the previous generation to believe that the process of change is not beneficial in that what it has uprooted is better. This find justification in the issue many African countries including Nigeria are facing in the modern age, most of the modern kid are exposed to foreign style of dressing, advance style of living of which the other generations has been dogmatically believe is wrong or to a degree not religious or some other justification. Social change will not favour everybody but mostly favours the new generation cause the aim is always gravitating to approving something new and displace most time the previous form of doing such a thing. Indeed, interpretation of social changes usually involves moral judgement. The effect of change may not be uniform, even within a city or geographical region.

Many authors has different explanation regarding the analytical power of their theoretical formulations. Karl Marx being a socialist and a communist was also of the opinion that change is primarily caused by improvement in the technical force of production.  Karl Marx tries to see change from production angle here and also expressed the view that societies must pass through different stages.

Futhermore, to Parson, who was a capitalist opines that capitalism which is as concept of government where the means of production, distribution and exchange of goods and services are being controlled by the state or the government of a country, is belief by him to be the best form of society possible and for Marx it was communism, where state owns the distribution and exchange of goods and services in her care. To the Elitist Theory as ably represented by Vilfredo pareto, an Italian Schoolar,  the main source of change is the elite in society. That elites are agents of change is also a popular view in some African countries.

Social change which is seen has interplay of different social forces could take on many form for change, an example is cultural diffusion. Cultural diffusion is a major agent of change. This has been helped by the revolution that has occurred in transportation. The imported element of any culture is not small. This portrait the ideology of lending idea and way of life from other culture because borrowing between culture is thus inevitable as no society is an island unto itself.

William F. Ogburn in 1922 looked into this and described the situation as “Cultural Lag” this concept simply means that two correlated parts of culture change at unequal speed. The part which changes slowly is said to lag behind the other. When a Lag exists between one aspect of culture and another arises a problem of social adjustment and disorder.

Cultural lag has arisen over the years as a result of the differential growth of different aspect of culture. This in turn has come about because in the process of cultural contact or cultural diffusion both the material and the immaterial culture components respond in a different way, even within the same geographical entity.

There is no how one will talk about social change without talking about what can end up making it possible, one of the most potent too that can make social change positive is Socialization which is the process of acquiring political belief, norms, values as well as practices that shapes citizens thought. Socialization makes change possible. Through the family, the electronic media I.e the radio and television majorly, the newspapers, contact with foreigners and their culture, we learn new ways of doing things. Most element of Socialization get transmitted through the process of socialization. Culture which is totality of way of life get transmitted and transferred from generation to generation.

Socialization may takes a formal mode or an informal mode. It may involve direct teachings in school I.e at primary/elementary, secondary and tertiary, churches, mosques or indirect as through participation in the worship of ancestral spirits. Socialization take place throughout life as the process of socialization involves communication, language becomes central to it. One thing of course is central to socialization. Thes constitute method of social control in that they assist in socializing the young ones along acceptable paths.

MAJOR AIMS OF SOCIALIZATION CAN BE SAID TO INCLUDE:

2. Instilling in the individual aspiration, motivation and values which enables individual to seek out goals.

3. To ensuring a measure of predictability and control of behaviour and hence social stability through some degree of conformity to the culture norms of the society.

5. Inculcating basic knowledge, skills and techniques with which individuals deal with their physical and social environment.